Expanding existing state Renewable Portfolio Standards (RPS) into Low-Carbon Portfolio Standards (LCPS) would more than double the statutory requirements for clean energy in the United States. Such a policy shift would prevent the premature closing of many of America’s nuclear power plants and assure that nuclear power plants will be replaced with low-carbon electrical generation when they are retired.

In aggregate, the existing RPSs require a total of 420 terawatt-hours of annual renewable generation across 30 states and Washington, DC by 2030. If nuclear were included in new low-carbon standards in all states that currently have both RPS policies and operating nuclear plants, the mandated amount of clean energy would increase to 940 terawatt-hours of annual carbon-free electricity. Assuring these additional 520 terrawatt-hours of electricity remain low-carbon would prevent 320 million metric tons or carbon dioxide emissions, or 17% lower than would otherwise be the case. 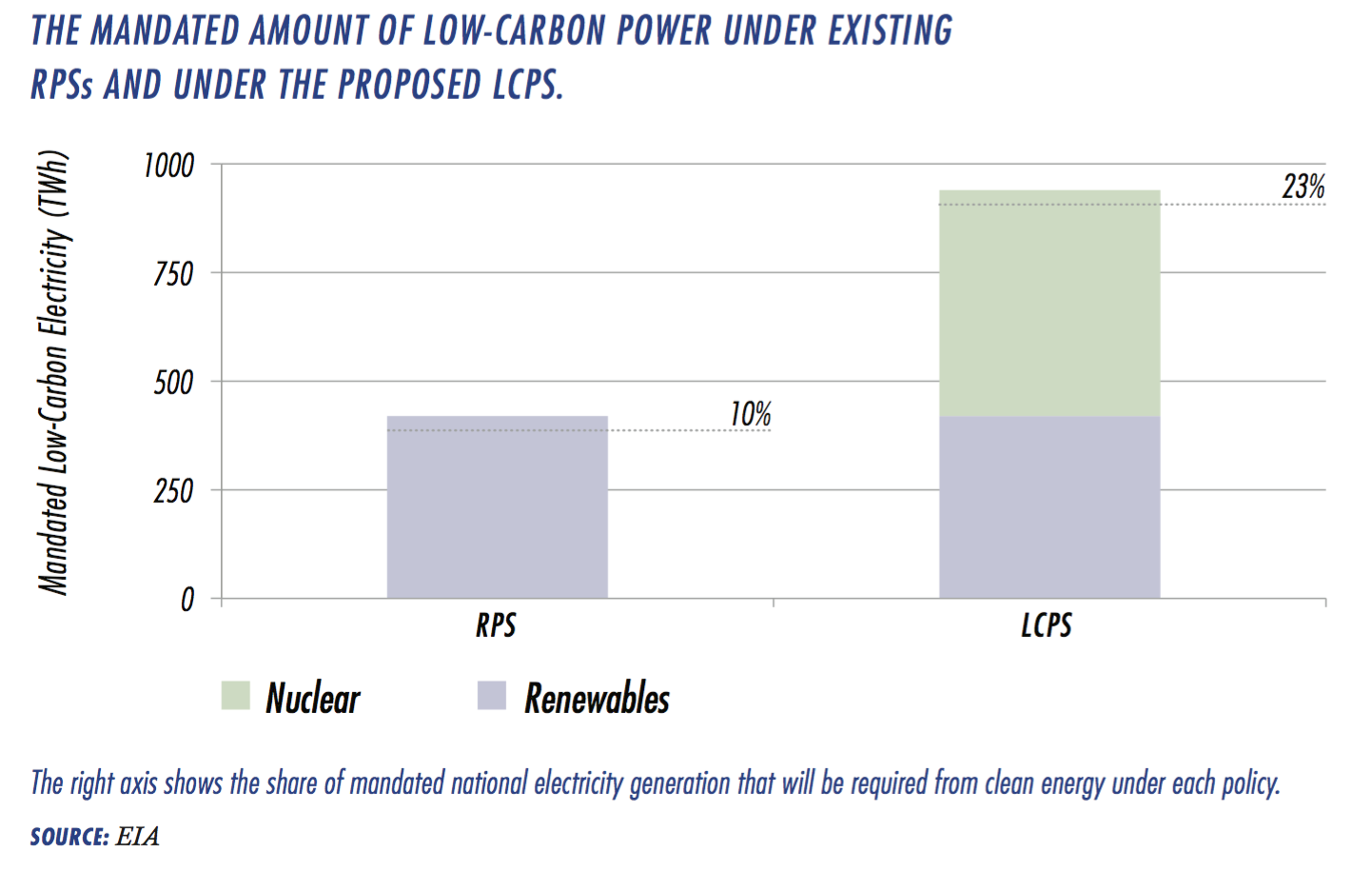 Replacing carbon-based sources of energy with low-carbon sources remains the most reliable indicator of long-term progress toward emissions reduction goals. In the power sector, Renewables Portfolio Standards have been a driving force behind deployment of renewable energy technologies in the United States. However, nuclear generation in the United States has stagnated over the last 20 years and may decline substantially in the coming decades. If existing nuclear plants close prematurely and are replaced with natural gas, as is likely, much of the gain in low-carbon share of US electricity generation associated with renewables deployment will be lost.

The loss of clean and reliable nuclear power will make the challenge of decarbonizing the US power sector much more difficult. This loss of clean electricity will threaten US climate commitments made as part of the Paris Agreement under the United Nations Framework Convention on Climate Change in December of 2015. This is true even if wind and solar replace a substantial share of the lost generation from retiring nuclear plants, since every megawatt-hour of nuclear replaced by renewables is a megawatt-hour renewables can’t replace from fossil fuels. As such, transforming RPSs into LCPSs would move the ball sig- nificantly farther downfield towards full power-sector decarbonization by midcentury.

In this report, we recommend expanding state Renewable Portfolio Standards into more ambitious Low-Carbon Portfolio Standards to include existing nuclear power plants. An LCPS would assure that premature retirements of existing nuclear plants do not erode some or all of the carbon and clean energy benefits of continuing deployment of wind and solar power in the short-term, while significantly raising the statutory requirement for deployment of low-carbon electricity generation over the long-term. LCPSs would also include new nuclear power, hydroelectric power, and fossil fuels with carbon capture and storage.

How Not to Save Nuclear