Federal action on climate change seems unlikely for the remainder of the current administration. Yet states have an opportunity to take leadership in climate progress.

Among the most significant state-level climate policies, Renewable Portfolio Standards mandate a certain share of electricity from renewable sources by a certain year. In a new report co-authored with Third Way, we argue that states could set more ambitious targets for decarbonization by expanding these renewables mandates into Clean Energy Standards, which would include renewables, nuclear, carbon capture, and other low-carbon sources.

Most state Renewable Portfolio Standards expire in the next three to five years. As states revise their power sector decarbonization mandates, Clean Energy Standards would enable much higher targets. For example, a state like Arizona could move from its current 15% RPS to a CES of 70% by including its nuclear generation and continuing to encourage aggressive renewables deployment. Considered nationally, RPS policies currently mandate that about one-sixth of US electricity generation comes from clean sources in the next ten years. Since nuclear already provides about one-fifth of US power, the share of “guaranteed” American decarbonized power would be more than doubled by adopting Clean Energy Standards in every state. 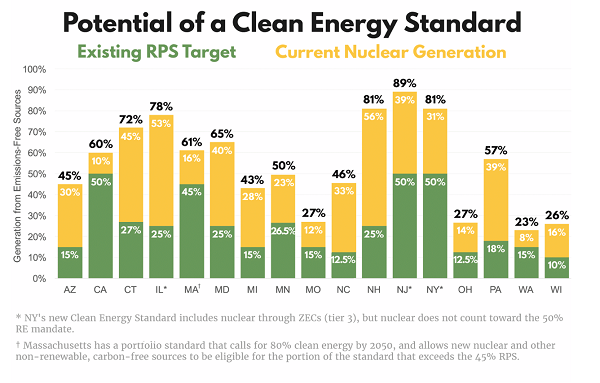 Despite aggressive policy support for renewables from federal and state governments, their contribution to decarbonization has been undercut by recent nuclear plant closures. When nuclear plants retire, they have often been replaced by new fossil fuel infrastructure (mostly gas) that will last for decades. Clean Energy Standards prevent this backsliding by creating a policy incentive to keep nuclear plants open — and even if nuclear plants retire, utilities must replace nuclear entirely with clean generation.

In the last few years we’ve seen more and more support for saving America’s existing nuclear plants. But much of the action has been in the form of one-off, plant-by-plant bailouts or proposals to subsidize coal along with nuclear at the federal level. Clean Energy Standards could ensure that economic support for nuclear derives from its climate benefits, not tenuous arguments about reliability or national security, and provide a coherent and holistic framework for doing so.

But Clean Energy Standards aren’t just for incumbent nuclear. Because all clean sources count towards the mandate, innovative technologies like carbon capture, waste-to-energy, and advanced nuclear will receive support as well. Long-term policies should recognize the long-term shifts in energy technology that are likely to occur in electricity decarbonization. For example, in states with significant recent investment in gas generation, carbon capture could be the cheapest decarbonization pathway over the course of the next few decades. Waste-to-energy, meanwhile, is net carbon negative when compared to uncontrolled landfills, and should be compensated for its climate benefits within a CES on a prorated basis.

Clean Energy Standards are the simplest baseline policies for power-sector decarbonization. They will — and should never — be the only climate policies. But through their simplicity and inclusivity, they could be politically viable in more states, and they provide the maximum amount of flexibility for clean energy deployment and innovation over the long term. If progressives really do care about climate change, and if conservatives really do care about market competition, a Clean Energy Standard should have broad bipartisan support.

Josh is the Vice President for the Clean Energy Program at Third Way.

Ryan is the Deputy Director of the Clean Energy Program at Third Way.

Planting the Seeds of a Distributed Nuclear Revolution

The Diablo We Know