Hopes were high when American electricity market deregulation began in the 1990s. By breaking up traditional utility monopolies on generation, transmission, and distribution, reformers hoped to create competitive markets that would increase dynamism while lowering costs. But despite the big promises of electricity deregulation, it appears to have had little obvious impact on innovation or prices.

Today, electricity deregulation is still a live issue — and its impacts are still poorly understood. Voters in Nevada are currently deciding on their electricity market future: deregulation is on the ballot in November. If the ballot measure passes, Nevadans will be able to choose between retail energy providers by 2023. Environmental groups like the Sierra Club and the Natural Resources Defense Council oppose the Nevada ballot initiative, arguing that regulatory disruption would harm rooftop solar industry and impede climate progress. But are these claims supported by the experience of power market reform in the US?

The academic literature is surprisingly quiet on the climate impacts of electricity deregulation. While some research finds that incentives for renewable energy are more effective in competitive markets, no nuclear plants have been built in deregulated markets in the US. Many existing nuclear plants in deregulated states have required subsidies to remain economical — while many of those same plants have also experienced noticeable increases in operating efficiency since deregulation began. Given the considerable uncertainty about the effects of deregulation, we examined carbon intensity and clean energy deployment in regulated and deregulated markets. While there are some interesting trends in the data, factors like path dependency, technological change, and natural resource endowment appear to have a bigger impact than deregulation.

Looking at state-level carbon intensity of electricity generation, we found that states with a deregulated market have on average a lower carbon intensity than states with a regulated market, both before and after deregulation occurred. Deregulated states include Texas and most states in the Northeast and Midwest. States are coded as “deregulated” if they have differentiated ownership of generation, transmission, and supply, as well as a competitive wholesale electricity market. Otherwise, they are coded as “regulated.” While each state’s deregulatory process is slightly different, we use a binary classification to simplify the analysis. 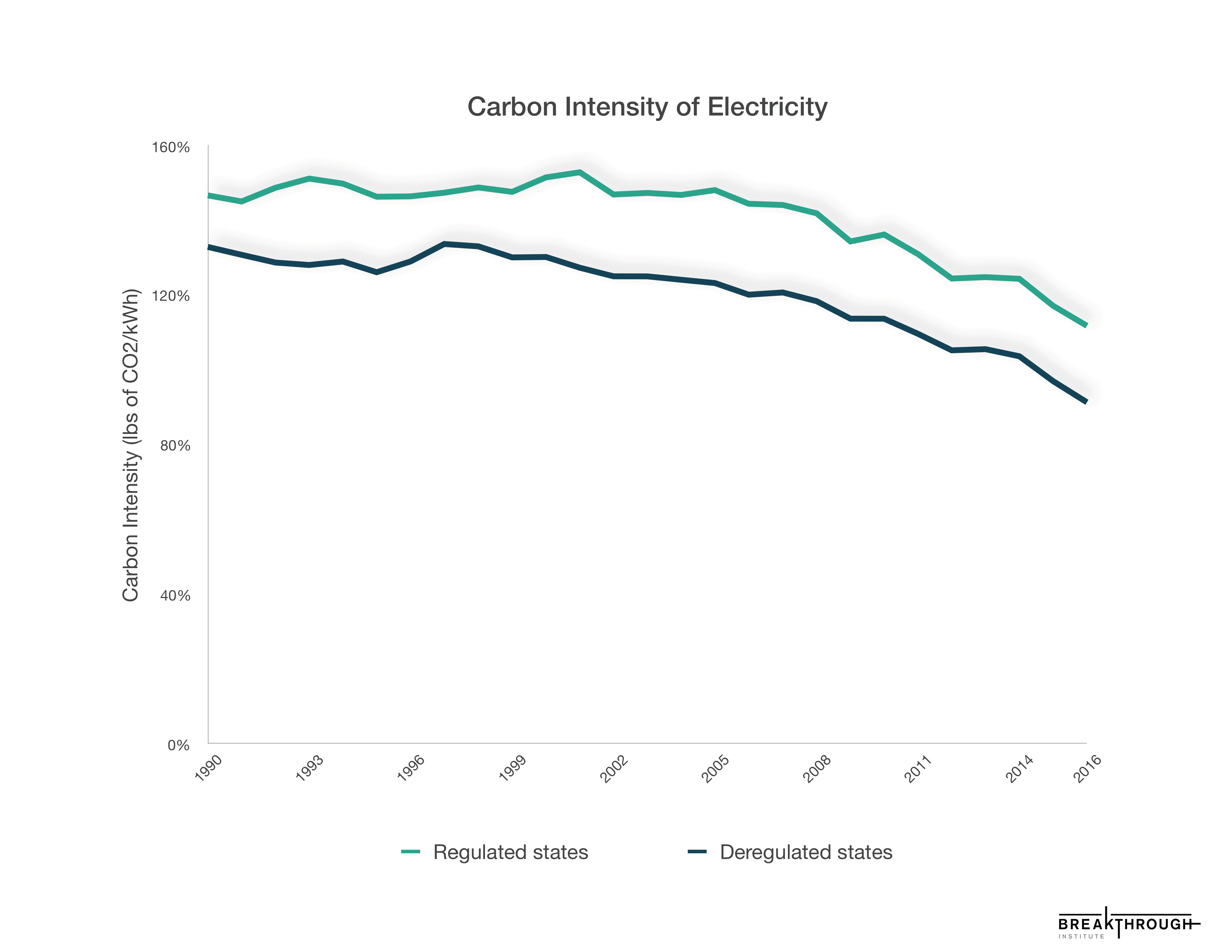 Among individual fuel sources, we see that fuel switching between natural gas and coal drove deregulated states’ faster decline of carbon intensity. This is consistent with Breakthrough's past findings that coal-to-gas switching has been responsible for most U.S. emissions reductions in the past few decades. Fuel switching might be facilitated by the increased competition among generators in deregulated markets. 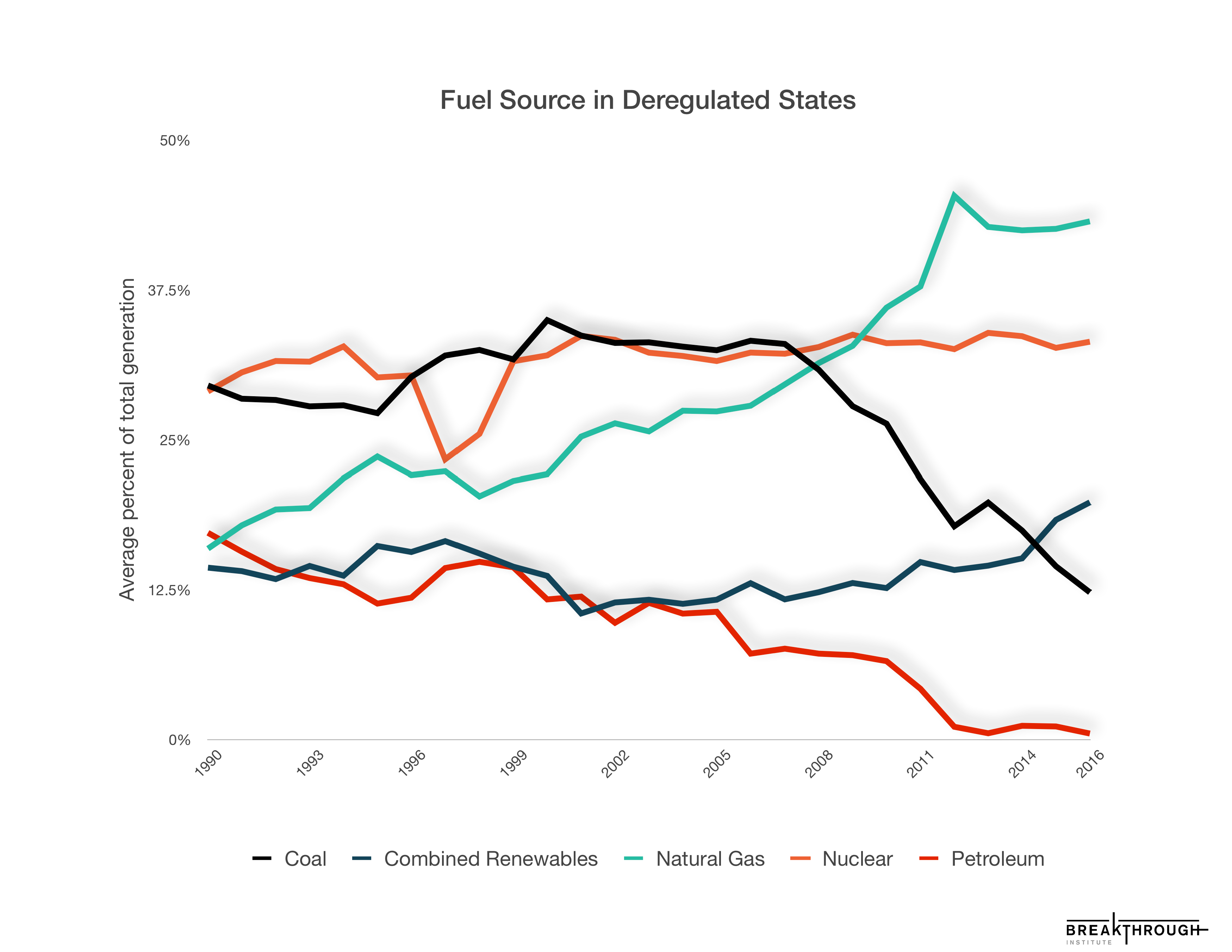 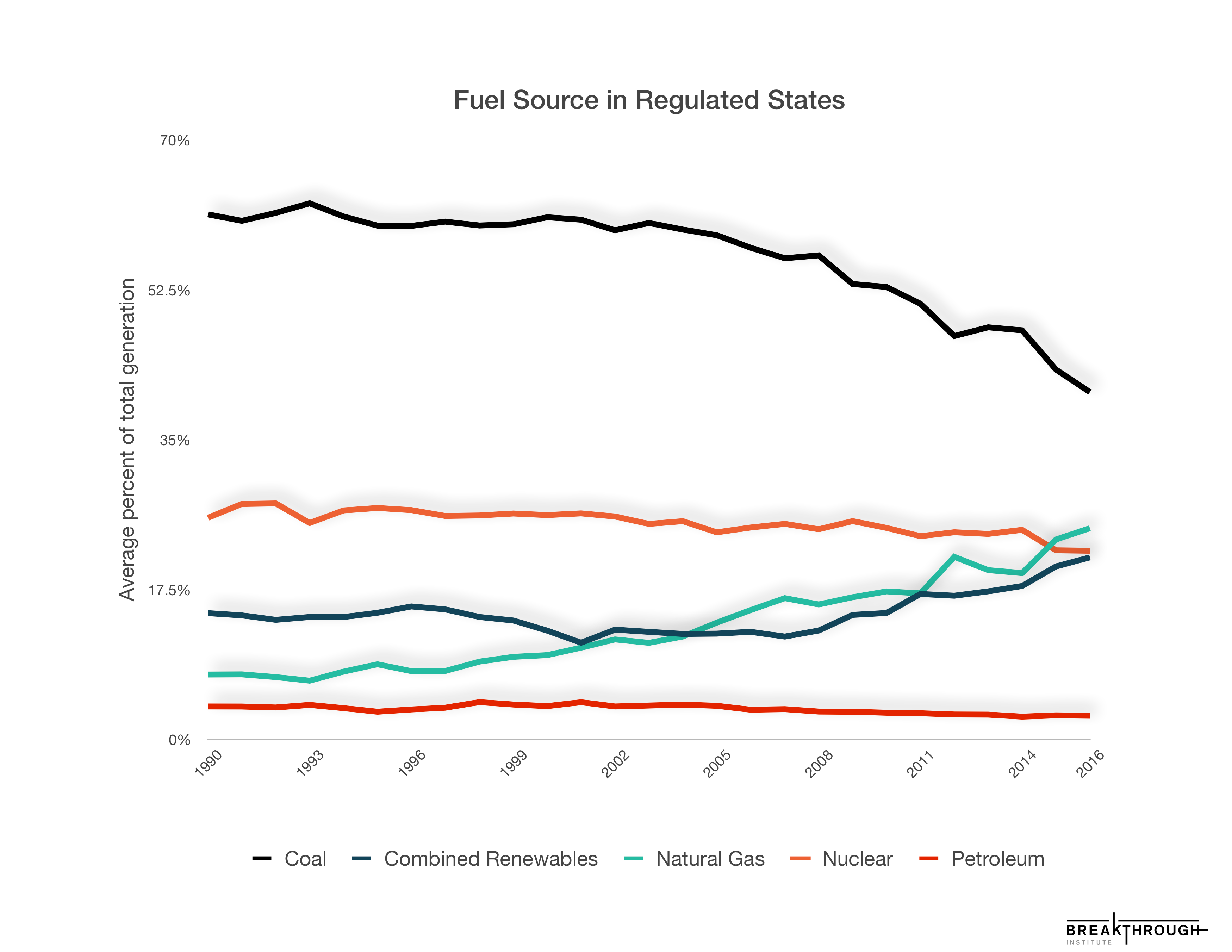 Notably, the share from nuclear stays fairly stable over this time period in both regulated and deregulated states. A study by Lucas Davis at UC Berkeley found that nuclear’s economic performance improved with deregulation, but others have found that existing nuclear plants in deregulated, merchant markets are at a higher risk for early retirement. 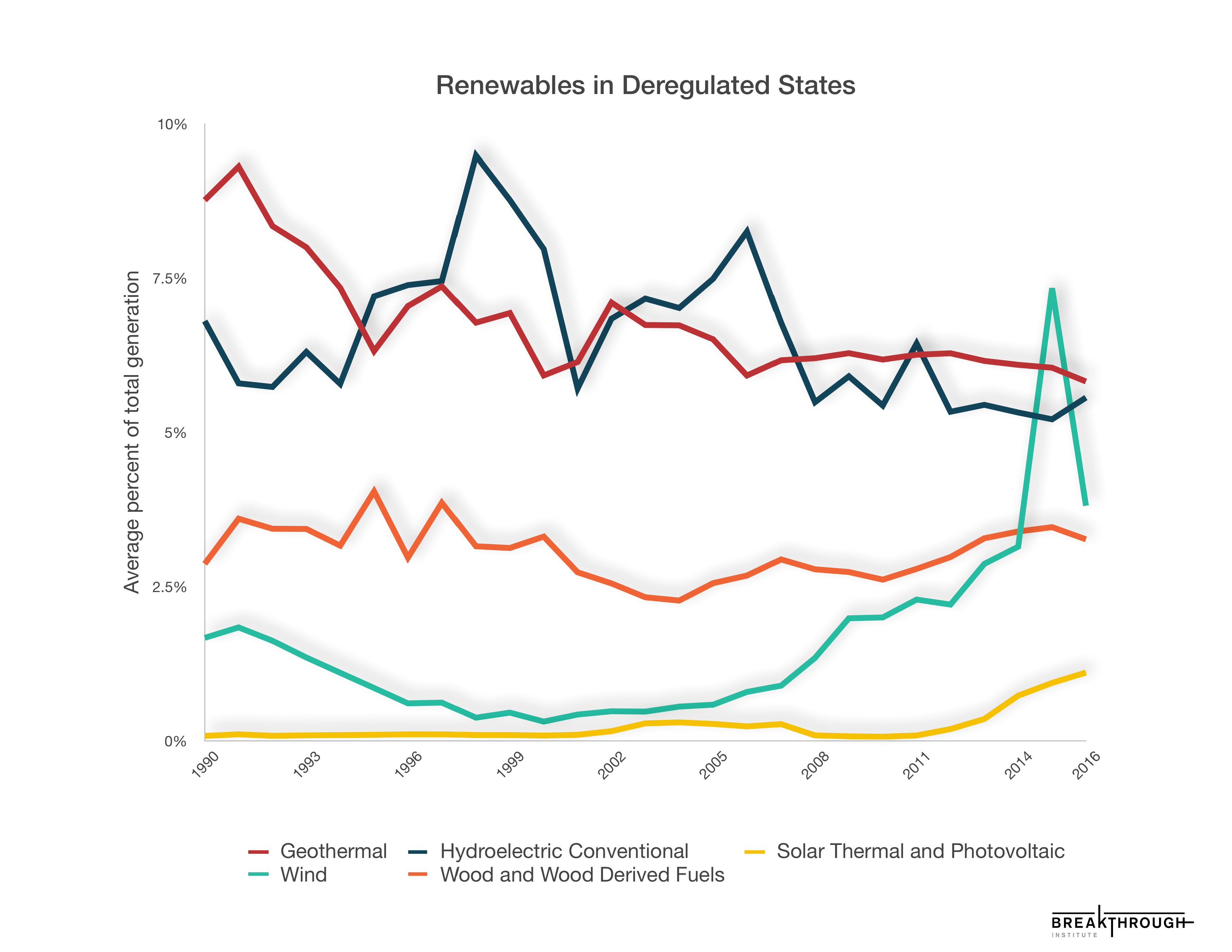 Regulated states, meanwhile, generally have higher shares of hydroelectricity across this time period, and saw a dramatic increase in wind generation after 2005. The high wind generation is consistent with the greater wind potential in many inland regulated states, illustrating again that the natural resource endowments of a state often have a more obvious influence on generation than the market structure. 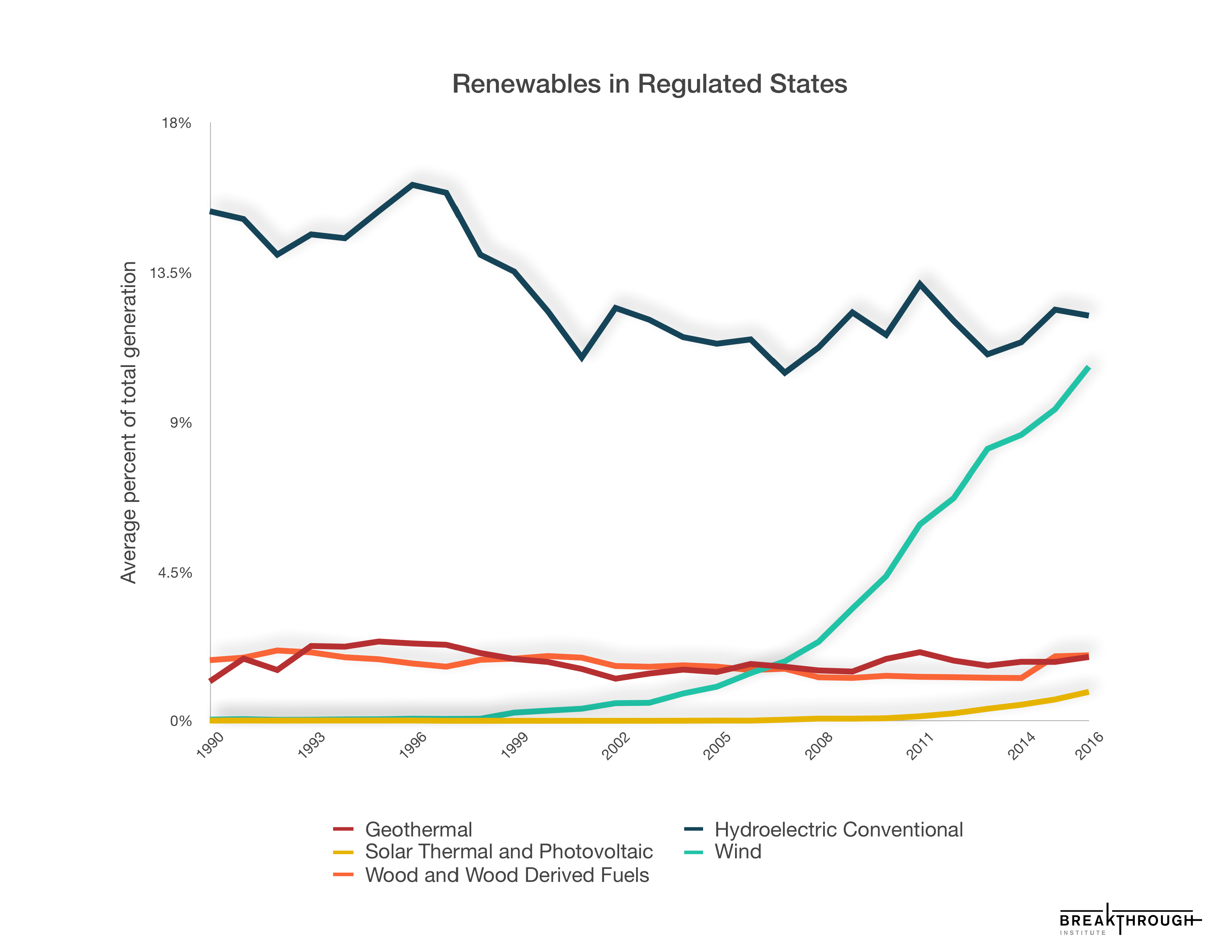 For fuel mix and renewables growth, deregulation thus appears to have had little obvious effect. But we do see a noticeable difference in utility-scale battery deployment, which has favored deregulated markets. There are possible policy reasons for this. A frequency regulation market implemented by two wholesale operators, PJM and CAISO, rewards batteries by providing a higher premium. This market developed in response to FERC orders in 2011 and 2013. The difference in capacity added between the two groups demonstrates that variations in wholesale market structure across states can still make a noticeable difference. 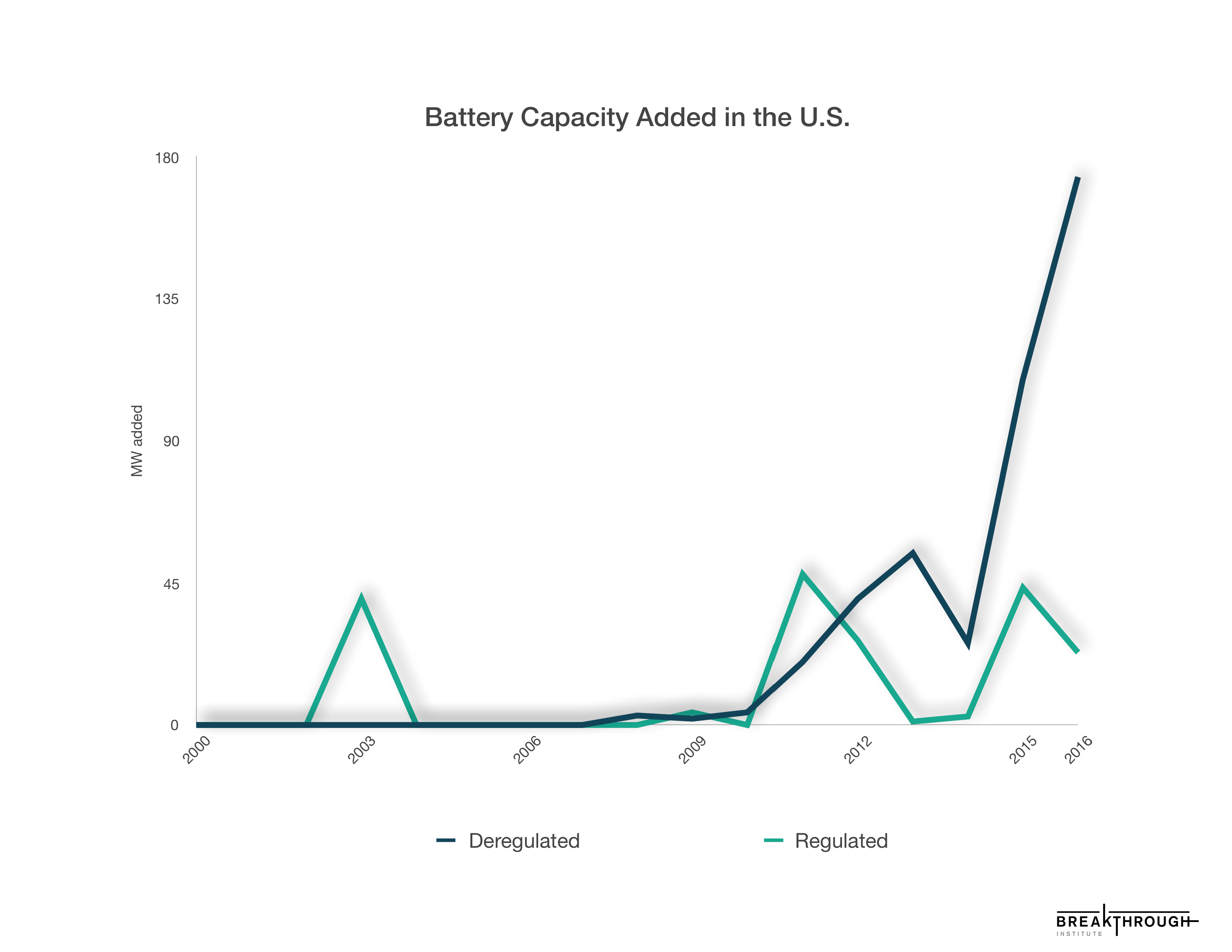 Earlier this year, FERC passed another order, Order 841, which requires deregulated markets to make it easier for batteries to compete with other technologies. The response of the battery market in the future will give greater insight into whether policies developed from deregulation can benefit new technologies.

After two decades of deregulation, it is still too early to decisively examine its effect on long-run path-dependent energy systems. At this point, the change in regulation appears not to have had a clear impact on decarbonization or renewables deployment, especially compared to confounding factors like technological change and natural resource endowment. This is possibly due to the long lifespan of plants, high upfront costs, differing technical potential, market unpredictability, politics, or the continued and unavoidable regulation of the grid to ensure reliability and affordability. However, deregulation does seem to have produced a noticeable difference in battery capacity added.

Future research is obviously needed to attempt to control for the multiple factors influencing the evolution of deregulated and regulated electricity markets. Only then will voters in Nevada — and energy planners around the world — get a clearer picture of the environmental impacts of electricity deregulation.