How to Raise the Ambition of State Climate Policy: Just Add Nuclear

As the national debate around the Green New Deal continues — with no end, or meaningful legislation, in sight — states have been quietly forging ahead on climate. A wave of state legislatures across the country are considering or passing bills to require 100% clean electricity by 2050, an ambitious target for deep decarbonization of the energy system.

We have been prominent advocates of these Clean Energy Standards in recent years. Clean Energy Standards are among the simplest and most effective measures for states to decarbonize their power sectors. They create a single, technology-neutral, climate-focused mandate that builds on existing Renewable Portfolio Standards, which have successfully fostered renewable deployment across the country. But crucially, Clean Energy Standards also include technologies like nuclear and carbon capture. Current research shows that a mix of low-carbon generating sources will enable power sector decarbonization at a lower cost, compared with only intermittent renewables. 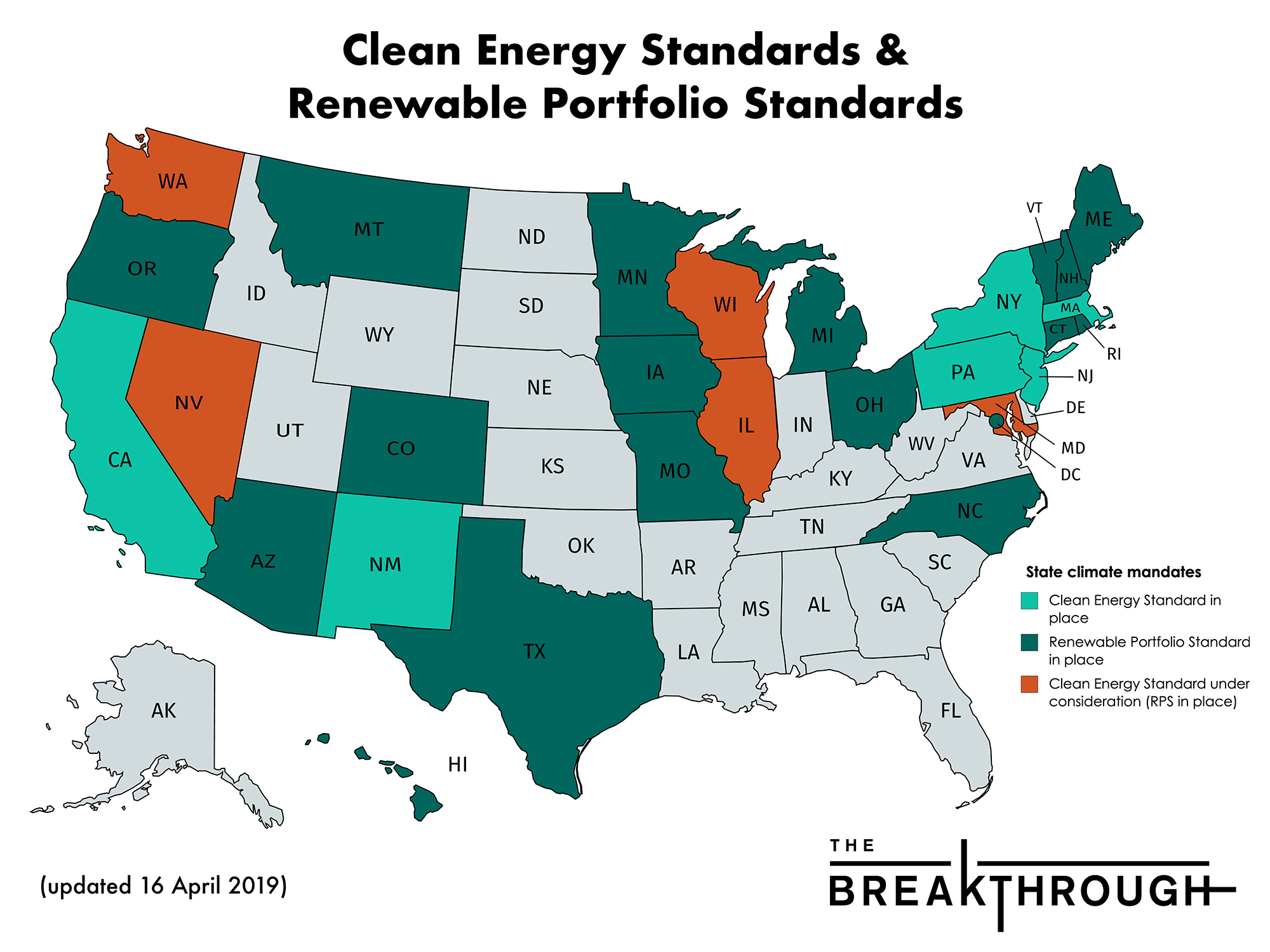 Sources: Center for Climate and Energy Solutions and National Council of State Legislatures

As we demonstrated in the report, adding nuclear to existing Renewable Portfolio Standards can as much as double the clean energy mandate share (see figure below), making 100% clean electricity much more feasible in many states. This isn’t just an accounting trick: many nuclear plants are under threat of closure due mainly to competition from cheap natural gas, so credits created by Clean Energy Standards can help keep these zero-carbon workhorses online. 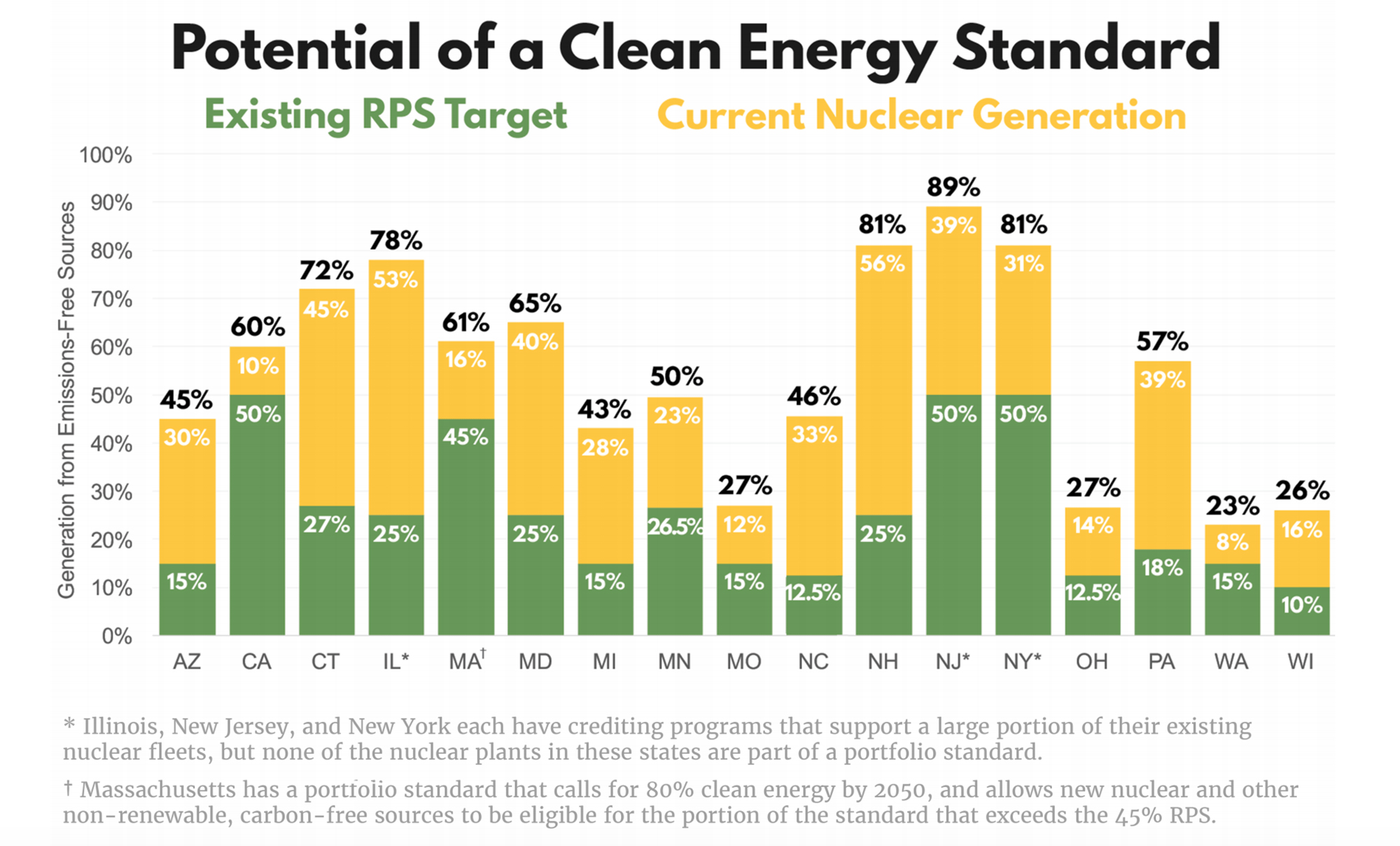 Where next? First, Congress should consider passing a national Clean Energy Standard. Sen. Tina Smith (D-MN) and Rep. Ben Ray Luján (D-MN) announced last week that they are preparing to introduce such a bill in their respective chambers. A federal CES is an idea that has been around for a decade, and it would amount to the most ambitious climate law ever passed by Congress. Since it would include support for nuclear and fossil fuels with CCS, it could get bipartisan support, too.

Power sector decarbonization is fairly well-understood. A mix of resources promises the cheapest, fastest, and likeliest path to zero, so state policies should be kept open to multiple technologies to ensure flexibility. However, the power sector accounts for less than a third of US emissions. The leading idea for dealing with other sectors is to “electrify everything,” and luckily, a Clean Energy Standard would help ensure that electrification leads to decarbonization.

But far-reaching technology policy will still be needed to decarbonize sectors like transportation, buildings, and industry — the other main sources of carbon emissions, for which decarbonization is more difficult. Most technology policy is administered on the federal level. For this reason, rather than dismissing recent Republican calls for innovation policy to address climate change, proponents of the Green New Deal should embrace them as a necessary, if not sufficient, step to promote clean technologies that will both likely be needed to fully decarbonize the power sector and to achieve significant decarbonization beyond the power sector.

States can continue to build on the successes of RPS and CES by creating mandates for clean vehicles, homes, and industry — and ratcheting up their targets for their power sector mandates. Just as federal support for solar, wind, and nuclear has combined with state mandates to decarbonize electricity, federal technology policy can combine with state mandates to accelerate decarbonization more broadly.

Ultimately, neither mandates nor innovation policy can succeed alone. Mandates only work if the technology is “close enough” to being cost-competitive that the mandate can effectively operate on the margin. There have been a few examples of failures in climate mandates, like the ethanol subsidies in the federal Renewable Fuel Standard. That is why mandates and subsidies must go hand-in-hand with aggressive technology policy to make clean energy cheap.

As with a federal Clean Energy Standard, comprehensive federal mandates to accelerate the shift toward other low carbon technologies would be ideal. But as states around the nation are demonstrating, it may be possible to drive deep decarbonization of the US economy through a patchwork of federal innovation policy and state deployment mandates. Indeed, this patchwork might prove more resilient to political headwinds, as it can bring climate policy down from the symbolic national discourse and into the practical “laboratories of democracy” of the states.

The Green New Deal and the Legacy of Public Power