In Defense of Technology-Specific Climate Policies

Earlier this week, researchers at the University of Chicago’s Becker Friedman Institute released a working paper on the costs of Renewable Portfolio Standards (RPS). The authors found that RPS programs have resulted in emissions abatement costing significantly more than most estimates of the social cost of carbon, and implied that a carbon tax would be a more efficient policy instrument to reduce emissions. Several others have already dug into the details of the paper: Amy Harder covered the paper in Axios, and Jesse Jenkins had a Twitter thread on methodological critiques.

What jumped out to us was the paper’s omission — all too common within environmental economics — of the economic value of policies like RPSs for driving innovation and technological learning. The researchers recognize that “positive spillovers” of an RPS for energy technology may have “quite substantial” benefits, but their analysis of the costs of RPSs does not attempt to account for them. While it may prove true, at least in a model, that carbon pricing is the most optimal and efficient way to reduce emissions, technology and industrial policy are the main way societies create emissions reduction opportunities in the first place.

We at Breakthrough have long nurtured a friendly skepticism towards deployment policies like RPSs. Societies will create a clean energy future by making clean energy cheap, not decarbonizing by fiat. But well-designed mandates and standards can play a role in making clean energy cheap over the long term. Focusing narrowly on emissions reduction today, as the authors of the UChicago paper do, misses the point.

Consider the stylized figure below. Economists call this the marginal abatement cost (MAC) curve. On the y-axis we have the cost of emissions reductions, and on the x-axis we have the quantity of emissions we want to abate. Cheap emissions reduction opportunities are stacked on the left side of the curve; many improvements in energy efficiency actually save money, so their cost dips below zero on the graph. In general, as we move rightward on the MAC, we get to more expensive things like fuel switching and deployment of zero-carbon alternatives to fossil fuels. Things like technology to capture carbon dioxide from the air tend to fall even further up the curve. The intuition is simple: the more we want to reduce emissions, the more it costs. 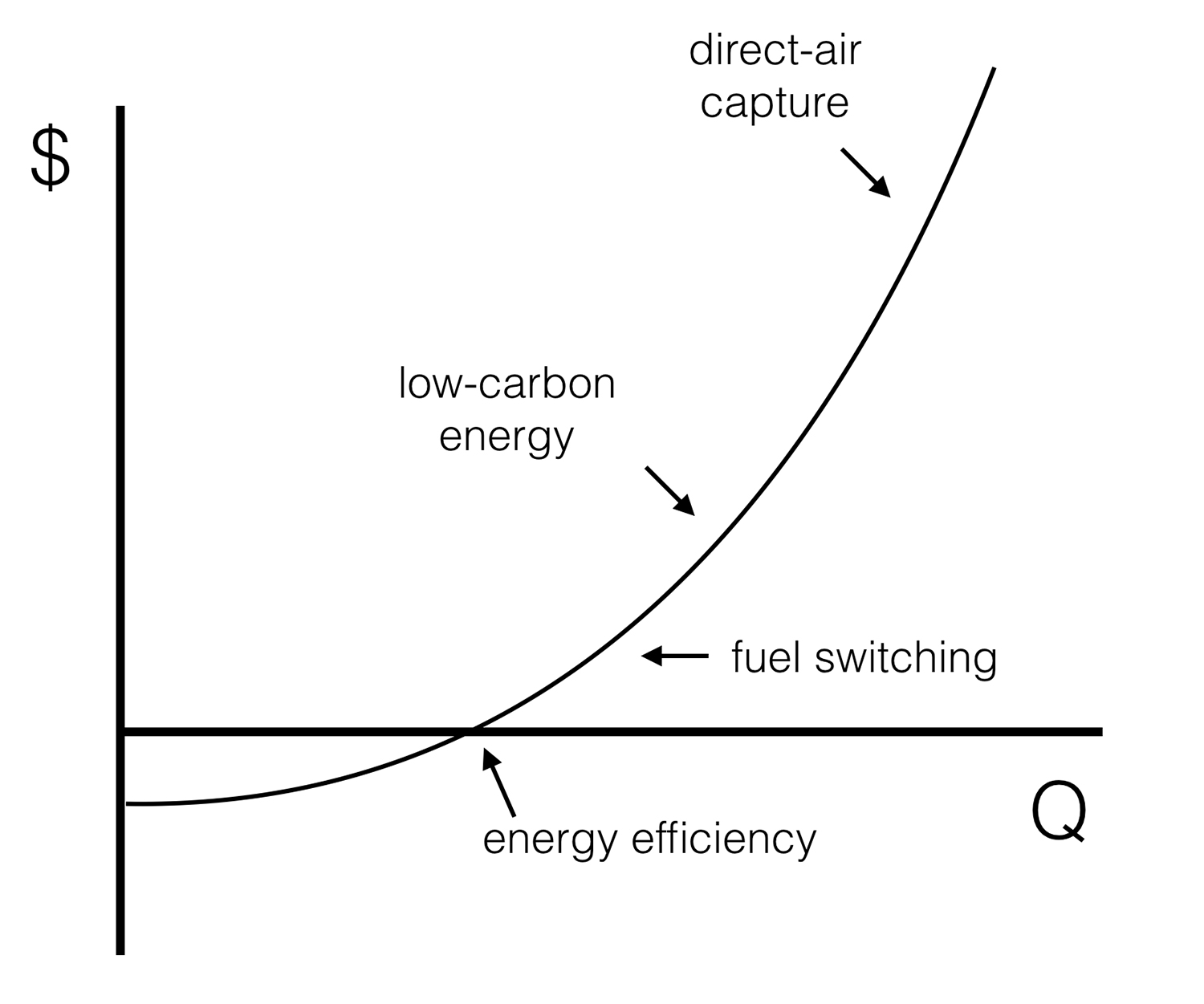 Economists like carbon prices because they efficiently incentivize private actors to realize the emissions reduction opportunities along the curve. If the price is relatively low, it might at least be enough to encourage consumers to become more energy efficient. If it’s a little higher, say, an electric power utility might switch from coal to natural gas. Higher still, and we might deploy lots of solar, wind, and nuclear power plants.

The UChicago researchers claim that policies like RPSs are an inefficient way to achieve the same outcome a carbon price would. In effect, if we choose the RPS, we’re overpaying for climate mitigation. There are a few flaws in their approach: their aggregation of states obscures key differences in RPS design, and their attempt to measure effects on retail prices (as opposed to actual investment in capacity) opens their causal claims up to more potential confounders.

At the most basic level, though, the researchers are right. RPSs were designed to deploy above-cost low-carbon technologies because utilities in the United States relied too heavily on dirty fuels like coal and natural gas. Dozens of states passed RPSs to reduce emissions and because solar and wind (and other renewable technologies) were popular, even though solar and wind were more expensive than fossil fuels and therefore not purely “efficient.”

But then something happened that the traditional analysis often misses: wind and solar got cheaper. Way cheaper. In the last ten years, the price of solar (LCOE) has declined by 85%, and the price of wind by 50%. That simply wouldn’t have happened without the technological learning, economies of scale, and spillover innovations that come from the deployment of actual technologies.

Could a carbon price motivate innovation and deployment of clean energy for a lower cost than mandates and standards? Maybe. But putting aside the political economy challenges of instituting carbon prices much higher than $10-20/ton CO2, we don’t actually see much evidence that pollution prices drive deployment of clean alternatives. Studies tend to find that while the oil crises of the 1970s drove increased patenting of alternative technologies, there is less evidence that explicit pricing policies do the same. Pricing policies seem better at motivating marginal changes, like energy efficiency improvements and fuel switching, than significant technological innovation and deployment. Carbon pricing might be well-suited to the low-hanging fruit of emissions mitigation through efficiency and fuel-switching, and perhaps less well-suited to deep decarbonization.

Maybe that’s because carbon prices simply aren’t high enough. However, in a world where technology-specific policies already help deploy and drive down costs — and carbon prices high enough to do the same have never been passed — we think it’s worth sticking up for technology policy.

As Breakthrough has been writing since our founding, technology and industrial policy are where good technologies come from. This has manifested in various ways: tax credits and mandates, government ownership and procurement, public-private partnerships, and more. These policies, to refer again to the figure above, help move the whole MAC curve down, and make climate policy cheaper in the long run. Carbon prices, in the short run and at politically acceptable levels, only move along the curve. Ignoring this essential function of technology policy seems to us a crippling, and at this point frustrating, shortcoming of the neoclassical economic approach to climate.

Of course, RPSs are not the end-all-be-all of climate policy, in the power sector or anywhere else. Other studies of the efficacy of RPSs have had mixed and unclear results, for the same reasons that the UChicago paper struggled to demonstrate causality. RPSs have existed in a rapidly changing energy market at the intersection of multiple other policy and market forces, like deregulation, the shale gas revolution, and federal tax credits for renewables.

And technology-specific policies can run the risk of being too specific. Wind and solar, the main beneficiaries of RPSs, are unlikely to achieve deep decarbonization on their own. We have advocated turning state-level RPSs into Clean Energy Standards that, in addition to renewable energy, would include technologies like nuclear power and carbon capture.

We also don’t think societies will subsidize their way to deep decarbonization. The goal of all technology policies, including deployment policies, should be to rapidly drive down the costs of clean energy to achieve subsidy independence.

Still, it is long past time that we all admit that technology policies are not a prohibitively inefficient alternative to carbon pricing. Like all things in life, they might be imperfect. And our reliance on them does not preclude any use of traditional environmental regulations and pricing. But if we want thriving societies and growing economies, without the emissions, the technologies to make that happen have to come from somewhere.

Where Good Technologies Come From: Case Studies in American Innovation

Beyond Boom and Bust: Report Overview