Evaluating the Efficacy of Emissions Caps and Targets Around The World

The election of Donald Trump has raised deep concern about the future of international efforts to address climate change. President-elect Trump has called climate change a hoax, and has vowed to withdraw from the Paris Agreement, rescind the Obama Administration’s Clean Power Plan, and end the so-called “War on Coal.” It is not yet clear, however, what impact these actions would have upon US or global emissions.

In this analysis, we examine what effect explicit climate policies—international commitments to reduce emissions, national emissions targets, and programs at the national and sub-national level to price or otherwise regulate carbon emissions—have had upon actual emissions. We use two metrics, the carbon intensity of energy and the low-carbon share of total primary energy, to evaluate the impact of climate policy before and after policies have been announced and/or come into effect.

The results as elaborated below have been decidedly mixed. For the most part, emissions signals from climate policies have consistently been overwhelmed by exogenous macro-economic and technological developments. The impact of climate policies has proven difficult to disentangle from other emissions drivers such as population growth, economic expansions and recessions, the collapse of the former Soviet Union, German reunification, the shale revolution in the United States and the shuttering of large nuclear fleets in Japan and Germany, to name just a few prominent factors and examples.

Under the best of circumstances, as in the United Kingdom, commitments have coincided with significant declines in the carbon intensity of the energy system and growth in the share of clean energy that appear to be policy-driven and exogenous to macro-economic dynamics. In this case, strong supporting policies including clean energy subsidies, performance standards, and deployment mandates have brought significant emissions reductions. But the UK case appears to be the exception. In most other cases, climate commitments and policies have had little or no discernible impact upon emissions.

The Kyoto Agreement was negotiated in 1997 and ultimately signed by 192 countries, including 40 advanced developed countries that made legally binding commitments to reduce emissions (referred to as Annex B countries). Every country achieved their emissions reduction commitments. Most, however, did not do so due to actions taken in the aftermath of the agreement. European negotiators succeeded in pegging commitments to a 1990 baseline, before the collapse of the Soviet Union, and in aggregating EU emissions for purposes of Kyoto compliance. By 1997, when the agreement was signed, the European Union and major EU economies such as Germany were well below their mandated emissions targets. Strong economic growth through the late 1990s and early 2000s threatened to push emissions beyond the targets agreed to in 1997 by many Annex B countries, but the global financial crisis and the collapse of industrial production after 2008 assured that most nations would remain in compliance.

Overall, the carbon intensity of economies that were party to the Kyoto Accord fell more rapidly in the decade before the agreement was signed than in the decade after. In the 10 years before signing, the compound annual growth rate for carbon intensity was -0.7%. In the 10 years after signing it was only -0.2%. Similarly, the low-carbon share of energy was growing at an annual rate of 1.0% in the ten years prior to 1997, and only at a rate of 0.3% annually for the ten years after, meaning deployment of clean energy stalled or slowed in comparison to fossil fuels in these countries after they signed Kyoto. 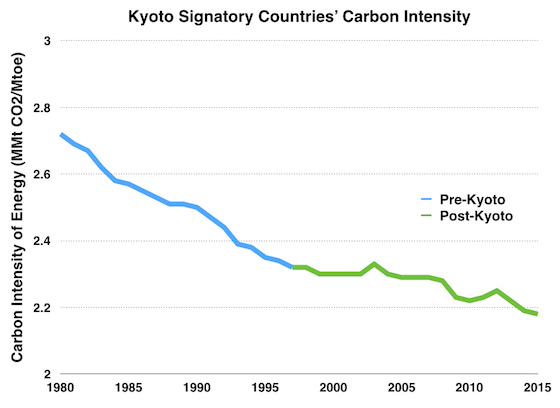 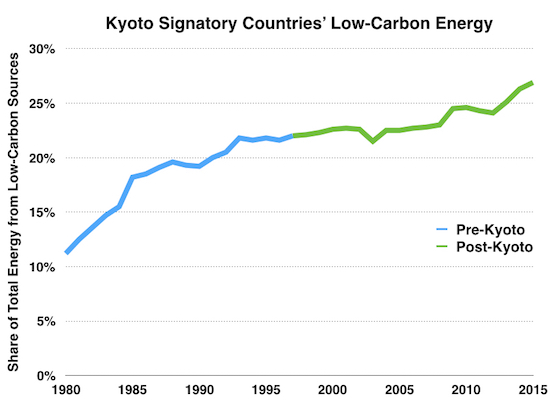 Based upon the Intended Nationally Determined Contributions (INDCs) submitted by over 190 countries at the most recent climate negotiations in Paris in December 2015, which outline unique decarbonization targets for each country based on domestic capabilities, that trend appears likely to continue. Recent MIT modeling projects global atmospheric concentrations of carbon in 2100 at 710 ppm assuming full implementation of INDCs, versus 750 ppm in the absence of them, which translates to a difference in temperature increase above pre-industrial levels of 3.7 versus 3.9 degrees Celsius.

What becomes clear in looking at climate policy as it has been implemented at the international level is that most countries have only been willing to commit to decarbonization targets that are consistent with expected business-as-usual trends, accounting for measures that they have intended to take in any event.

The record of emissions decline following the institution of climate policies at the national and regional level is also decidedly mixed. The rate of decarbonization among European economies that have been party to the European Union Emissions Trading Scheme (ETS) has been virtually unchanged during the ten years before and after the EU ETS capped emissions for the power and a number of other sectors of the EU economy. 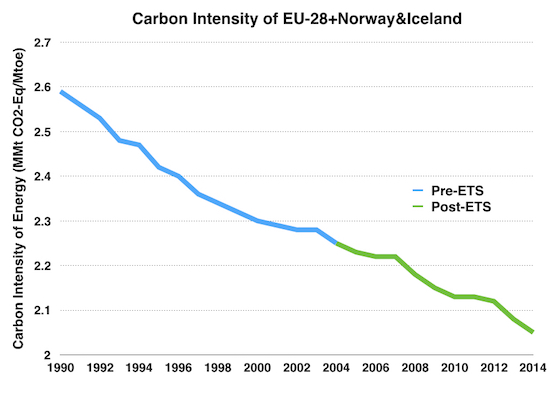 A similar system, the proposed national emissions cap in the United States under the Waxman-Markey bill, failed to pass the US Congress in 2010. But the proposed cap would have been higher than actual emissions have proven to be to date. This is due primarily to three factors: the fall in economic output after the financial crisis, slower than anticipated economic growth during the following economic recovery, and the shift in the US power sector from coal to gas generation. By some accounts, moreover, emissions might have fallen more slowly had Waxman-Markey been enacted due to the over-allocation of free emissions credits and a number of other provisions that would have supported coal generation in the early years of the policy. 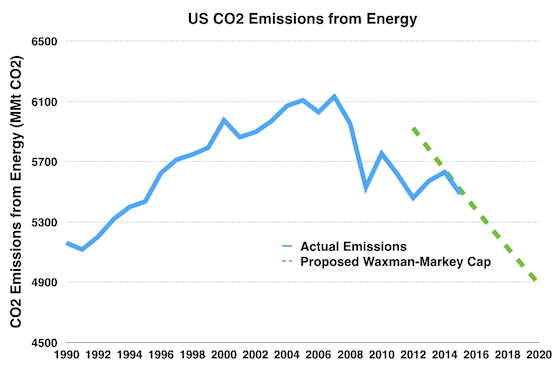 The Obama Administration’s Clean Power Plan (CPP) similarly appears to diverge little from the likely business-as-usual emissions trajectory that the US is already on, codifying the coal-to-gas transition in the power sector that has been underway for over a decade.

Other national and regional efforts have also seen, at best, mixed results. Germany has underperformed on its emissions reduction target for 2020, which was made law in 2007. Germany’s share of clean energy grew at 2% annually before 2007 and only 1% annually after 2007, and the carbon intensity declined at 0.5% annually before 2007 but has been almost flat since then. 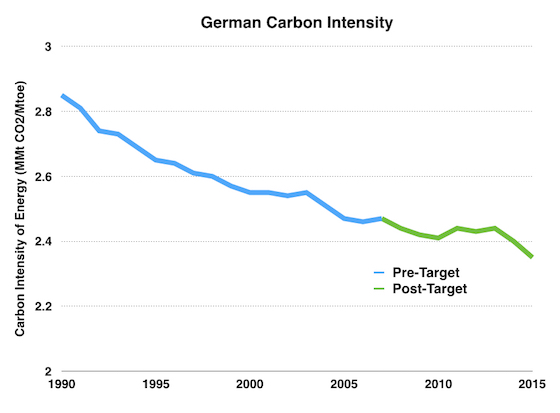 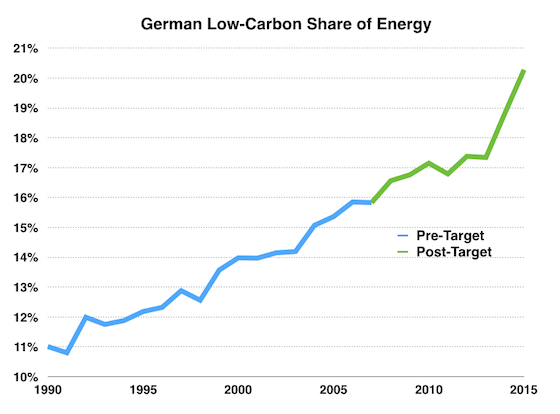 Similarly, California appears to have seen little change in long-term decarbonization trends since the passage of the Global Warming Solutions Act, widely known as AB32, in 2006. Overall trends are difficult to estimate due to lack of data tracking economy-wide energy use in California. Reliable data, however, is available for California’s power sector. The decarbonization rate in the California power sector has fallen more slowly since the passage of AB32 than in the eight years prior to passage. California’s clean energy share has actually been falling for several decades, as deployment of wind and solar energy generation has failed to keep up with the state’s energy use, drought has constrained the state’s hydroelectric capacity, and half of the state’s nuclear generation has been prematurely closed. The state’s share of low-carbon energy in the power sector has fallen at a faster rate since the passage of AB32. 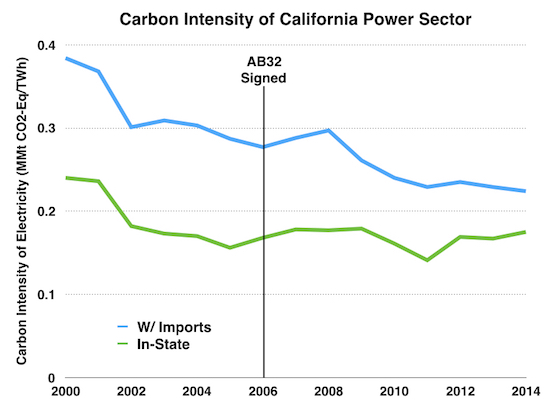 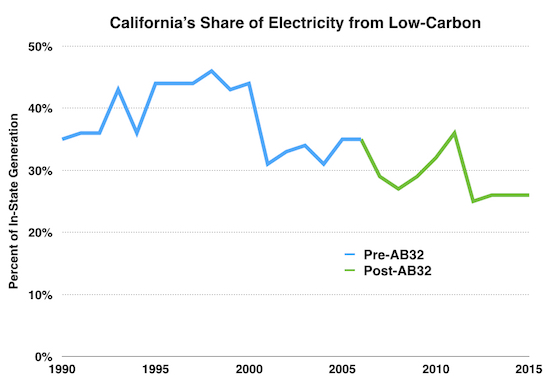 Perhaps the only clear success in any large economy or region to date has been in the United Kingdom. The UK economy has experienced substantially faster decarbonization and growth in the share of low-carbon energy after the passage of the Climate Change Act in 2008, which set a target of 80% reduction in carbon emissions by 2050. Enactment of the Climate Change Act coincided with the financial crisis, which may in part account for the higher rate of decarbonization. Clean energy share, however, also grew at a faster rate (8%) after enactment than before (-3%, actually declining), suggesting that Britain’s national climate commitments have been a driving factor in its decarbonization over the last decade. Of course, the UK has enacted a range of supporting policies alongside its emissions commitments, including aggressive targets and incentives for renewable energy deployment and targets to phase out coal and replace it with gas. 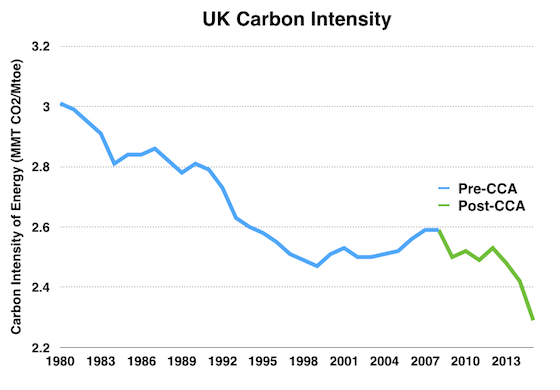 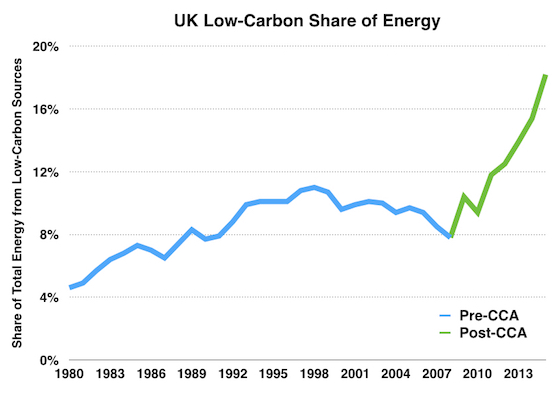 For purposes of this analysis, we distinguish between policies that target economy-wide emissions outcomes—emissions targets or caps—from direct investments in specific low-carbon technologies that displace fossil energy. The former can and have been enacted without regard to the latter and vice versa. What has become clear over the last several decades is that it is the latter, not the former, that determines the long-term trajectory of emissions.

Even should the next administration withdraw from the Paris Agreement and abandon the Clean Power Plan, the United States might outperform the commitments that the Obama administration made in Paris if it keeps the nation’s nuclear fleet online, continues tax incentives for deployment of wind and solar energy, and stays out of the way of the shale revolution. By contrast, a Democratic administration indifferent to the fate of the nation’s existing nuclear fleet and hostile to shale gas production might ultimately slow US decarbonization trends.

That doesn’t mean that efforts to decarbonize national economies cannot be motivated by concern about climate change, as the UK case demonstrates. Nor does it mean that international climate commitments and national carbon targets and caps have had no impact at all. It is impossible to say what emissions would have been in the absence of such measures and clearly, a range of actions to shift to cleaner energy sources have been motivated at least in part by climate concern and cognizance that some national and international action to significantly constrain emissions may be forthcoming. But if results to date are any guide, real progress on decarbonization primarily depends upon specific domestic energy, industrial, and innovation policies, not emissions targets and timetables or international agreements intended to legally constrain national emissions. Moreover, the difficulty in discerning a signal from climate policy amidst so much macro-economic and technological noise suggests that policy to date has not much shifted global or national emissions from a business-as-usual trajectory, if it has at all.

Is Paris Good or Bad?